I've gone back over the chaps and highlighted the white & blue areas, with a few green highlights too and decided that they're done: 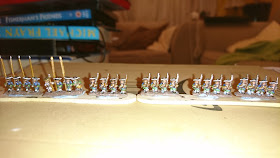 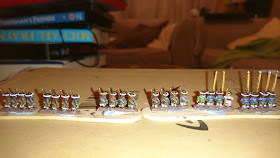 It's been an interesting experiment, adding the brown wash. I think that I should have started with brighter base colours than I usually use. 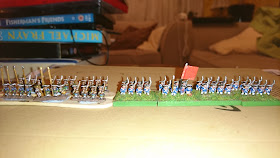 Tejler's Foot, with one of my Hessian regiments for comparison

I've never painted troops for someone else before. It is enjoyable, being part of a group effort, but I feel a bit sad that I won't get to see them, based and with colours flying, forming up with the rest of the army. Had timing and, you know, the world, been different, it would have been good to see both completed armies in action at Joy of Six. Maybe whoever wins them could put on a demonstration game next year?

Thanks for looking. Next up: troops for the War of Andreivian Succession.